Arsenal, according to various rumors, are in for a striker from Serie A side Sassuolo. Gianluca Scamacca is the mentioned forward, who has apparently already agreed terms elsewhere.

Nevertheless, Arsenal have made contacts and are trying to make the Italian striker come over to North London. The striker prefers to remain in Italy, with his contract at his current club running through till 2025. 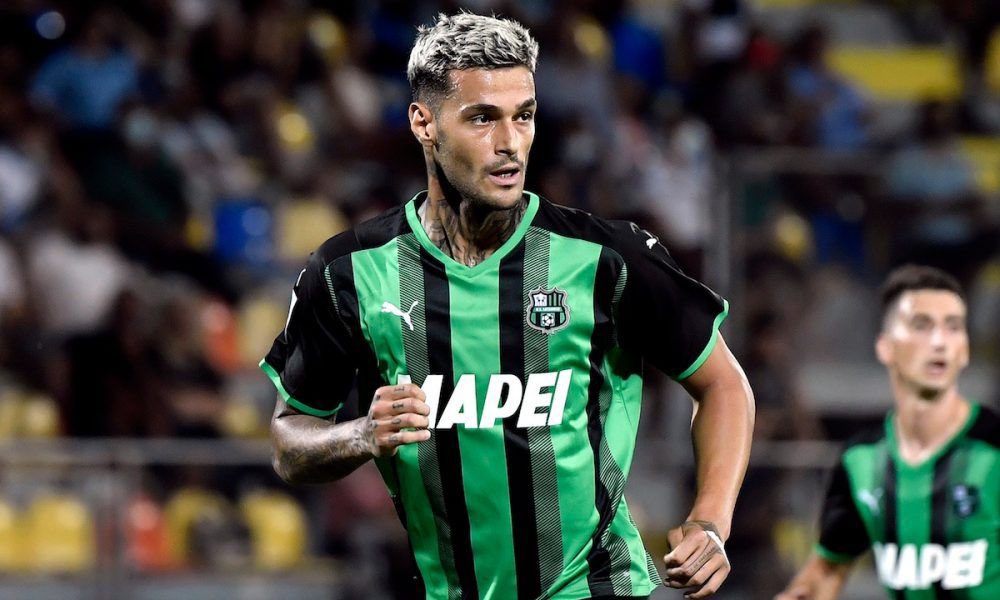 The Arsenal striker target is high in demand

Juventus and Inter Milan are the rumored clubs which could be potential destinations for the 23 year old. While his contract does run through till 2025, the striker will most likely be on the move this summer.

Not only these Italian giants, clubs including the likes of Borussia Dortmund and newly bought Newcastle are among the clubs that maintain a key interest in the striker.

Although, it has to be noted that the striker’s main goal is to stay put in the Italian league, where he feels at home.

For Arsenal, they are trying hard to fill the void left by Pierre-Emerik Aubameyang. After the Gabonese international left in January for Barcelona, the Gunners had too little time to line up a replacement.

Their main striking target, Dusan Vlahovic, left for Juve in that same month. With Alexandre Lacazette and Eddie Nketiah on the last few months of their contracts, it’s likely Arteta will be left with no strikers at this rate.

The Spanish coach has already identified this problem, and combined with the board is searching for replacements. The Sassuolo forward has registered 13 goals in 28 appearances this season.

His performances speak for themselves as he’s picked 3 national caps for Italy so far.

His current club values Scamacca at around €27 million, however that could always change. Especially, since Arsenal might be willing to go as far as bidding €40m for the player.

A target for the striker position is on the priority list, read about Arsenal’s link to Darwin Nunez here.

Arsenal look at Benfica striker to bolster their attack in summer

It was yet another bad day at the office as Arsenal chances of finishing top 4 took a massively dwindle. The Gunners were best positioned in years to finally land themselves a Champions League spot.

With this 1-2 loss at the Emirates, Arsenal stay at 5th in the table and 3 points behind Spurs. Still, Arsenal have a game in hand but current form doesn’t favour the Gunners.

A 3-0 defeat vs Crystal Palace followed up by a 2-1 defeat vs Brighton at home. Awful week for Arteta’s team in their race for top 4. pic.twitter.com/IeNkNhJ4In

The game started off quite dull as neither team was able to have sustained periods of possession. Just as Arsenal was looking dangerous with a shot off the post and one blocked shot off Saka.

In the 28 minute, a long ball and cut back topped off by a perfect finish by Trossard gave Brighton the lead. Half chances continued to fall to both teams till the one hour mark.

I honestly think this is on Arteta. We’ve seen Odegaard and Smith Rowe deployed this way and it’s never worked. He made the choice to disrupt at least three spots of his XI when he could’ve done just one.

At the 66th minute, a well worked move by Brighton topped off by an exquisite volley by Enock Mwepu saw Arsenal dead and buried.

A brilliant freekick by Martin Odegaard almost went in as it bounced back after hitting the crossbar, but the Norwegian pulled a consolation goal later.

United and Arsenal refused to back their manager's in January. Spurs did. Looks who is favourite for 4th

A minute before the 90th minute, the No. 8 shot from way outside and with a deflection, the ball went top left corner. Although, the attacking midfielder did not celebrate the goal.

The upsetting result has left the fans divided and separate sections of fans are blaming different people involved.

Look at what Mikel Arteta had to say about the loss tonight:

🗣️ "We were sloppy…" #AFC boss Mikel Arteta says his side didn't have the 'courage' to attack in the way he wanted against #BHAFC 🔴 pic.twitter.com/tHjYUxcHJ0

Unlike the previous loss away, fans are furious with the team’s performance and are aiming their anger toward the coach.

This seems as if Gunners have regressed from the progress Arteta and Arsenal had made earlier this season. Hopefully, Arsenal can manage top 4 and their chances of it won’t dwindle further.

I don’t wish to be alarmist but think it’s essential that Arteta immediately finds a way to stabilise this team and make it work without absentees. A top six place is utterly essential and a bad run now puts that in jeopardy.

Arsenal will now face Southampton away next week on Saturday, stay tuned!

Injury update on Partey as Tavares speaks out after Palace disaster

The club has issued a fresh update on the injury Thomas Partey sustained. The 28 year old suffered a thigh injury against Crystal Palace towards the end of the game.

His injury’s evolution will apparently determine his comeback, as the club’s statement didn’t specify any timeline.

This is what Arsenal’s official website had to say:

“Our No. 5 was substituted during Monday night’s game against Crystal Palace at Selhurst Park after aggravating his right thigh.

Thomas has since received further assessments, and a subsequent scan has shown muscle damage to his right thigh.

We will continue to assess Thomas in the coming weeks, during which time he will also receive further specialist consultations.

Everyone will be working hard to get Thomas back on the pitch as soon as possible.”

Partey hasn't given up hope of being back before season ends, but really looks like a race against time. Consultation appointment with specialist will be key.https://t.co/VvL3tHETdq

However, we can definitely make our own estimations about the holding midfielder’s return date. Thomas Partey had suffered a similar thigh injury in last season’s North London Derby, which kept him out for nearly 4 weeks.

If this thigh muscle strain is the same or at least similar in nature, we can expect him to stay away for nearly a month. Could possibly be more, but hopefully not.https://twitter.com/sr_collings/status/1512096241018097664?s=20&t=GbwuHR1-cZS8lYTAWTBeGQ

The Portuguese left back was one of the worst performers on the pitch for Arsenal on Monday in what was arguably their worst performance of the season.

The defender’s dull attempt at getting the ball from a set piece helped Palace set up their first. Not only this, he committed a grave error along with Gabriel when the duo were caught massively off guard for Eagles’ second.

Monday was an extremely frustrating night for me personally, for the team and the fans. It’s important to pick ourselves up, learn from the mistakes and react positively for Saturday’s game. Still a lot to fight for. COYG pic.twitter.com/WrdPHtL9qs

His message on twitter for fans was a mixed one as he tried to accept the team’s bad performance. But, also at the same time tried to move on and motivate fans and players to keep fighting.

Check out Arsenal team news after the game against Palace

Read up on all the latest Arsenal team news and much more in the aftermath of the game against Crystal Palace.

Kieran Tierney will, in all likeliness, be missing the remainder of the season. The 24 year old left back started feeling some discomfort in his left knee before the Crystal Palace game.

At last week’s training session after Arteta’s press conference on Thursday, Tierney damaged his left knee. This is all via Arsenal’s official website.

After serious consultations, more discussions between the player and the medical team, it was decided a surgery is required.

It was almost exactly this time last year that Tierney injured his knee.

Arsenal are in the same position now, but hope history won't repeat itself.

The surgery is expected to take place in London in the coming days, as well. However, at the moment no timeline for his comeback to the pitch are given.

Nevertheless, it is highly likely that Kieran will stay out of action for the remainder of the season.

Thomas Partey waiting to hear back on the results of his scan.

I'm told his thigh injury is similar to the one he suffered against Tottenham last season. 🇬🇭 #AFC https://t.co/CIxUbNfjce

Thomas Partey was substituted during the match against the Eagles, but the gravity of the injury is unknown. But, official sources says it is due ‘aggravating’ his thigh during the game.

There was optimism surrounding the return of Takehiro Tomiyasu from injury after Arteta’s press conference. Regardless, it looks like he will be out for at least a little over a week now.

The Japanese defender has had troubles with his left calf and won’t be joining the group in training.

The club’s official website says this about his return to the pitch. “It is hoped Takehiro will be back in full training after the match at Southampton on Saturday, April 16.”

Other than these three, however, there are currently no other injuries. The rest of the squad should be available for the weekend game against Brighton.