The Arsenal women team advanced to the Quarter-finals of the FA Cup after handing Reds a heavy defeat. The game went just as planned by Jonas Eidevall, whose team look almost unstoppable across all competitions.

Coming off the back of an international break, most first choice starters were benched for the game. However, the team picked from the players who stayed back did not disappoint one bit.

The game was dominated all throughout by the Gunners, except at the start when the team did well in sponging attacks. After that, it was all Arsenal.

The league toppers didn’t take long to fire on all cylinders as Caitlin Foord scored off a through ball by Souza. Arsenal would get another close chance which would be denied by the Reds keeper.

After thirty minutes into the game, Katie McCabe struck beautifully to doubles the lead. McCabe found herself receiving the cleared ball by Matt Beard’s women.

After getting the ball on the edge of the box, she fired a thunderous volley into the back of the net. Foord tripled Arsenal’s lead with a crushing shot soon afterwards, effectively killing the tie.

In the second half, the story of the game remained unchanged. Arsenal found themselves creating chances, controlled the game through phases of keeping possession. 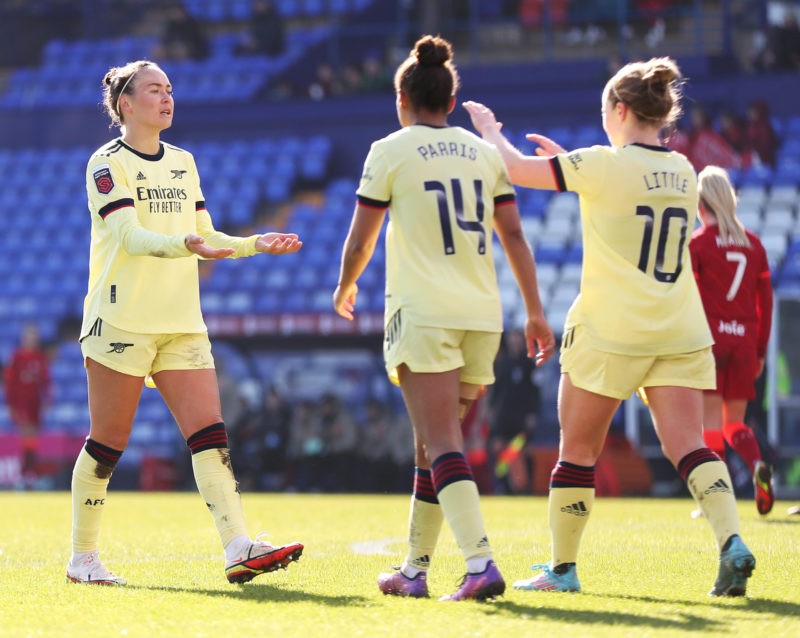 The 4th goal came through captain and no. 10 Kim Little who got an easy 1v1 with the opposition keeper before slotting it in for a straightforward finish.

Liverpool tried to get a consolation goal later on, but the backline managed to keep a clean sheet.

This sends the Gunners into the Quarter-finals of the Women’s FA Cup, as they continue their push for a treble.

Up next Arsenal will face Readings in the Women’s Super League away midweek, as they look to keep their top place. However, Chelsea still have a game in hand with only a 2 point difference.

In the month of March after this contest, Arsenal have a couple more league games. We will be hosting Birmingham City at home and then go away to play against Brighton.

The most crucial fixture of the month will be against German side Wolfsburg, who we’ll face in the Women’s CL.

Arsenal Women went away to Vfl Wolfsburg with an evenly contested aggregate of 1-1. An all round disappointing display by the Gunners saw them knocked out by the German side, who were better on the night.

With the score being 2-0 on the night for the hosts, and 3-1 on aggregate, Arsenal were unable to make a dent.

Arsenal Women vs Wolfsburg Women: How it all went down

Arsenal were on a high after their late equaliser in the first leg with Lotte Wubben-Moy’s late equaliser at the 89th minute. However, they were unable to keep that momentum going in this away leg.

Wolfsburg vs. Arsenal is being played with a peace symbol on the pitch ☮️ pic.twitter.com/qmVKlgWbyx

We did hit the bar twice in the second half as the team improved their showing from the first 45. Captain Kim Little’s efforts all came close, yet proved to be too far.

An early goal from Jil Rood put the Gunners right on the back foot from the get go. Still, a decent delivery in from the Wolfsburg routine kick taker the ball landed in their laps.

After a battle to steal the ball ensued, Rood stole and tapped it inside the Arsenal net. Moreover, it wasn’t as if Arsenal looked any better before the goal, either.

A badly defended corner resulted in a scrappy goal for the hosts. Tabea Wassmuth’s goal being disallowed meant that the scored remained only 1-0 in the German club’s favor.

Nevertheless, Arsenal’s attempts would all go in vain. Foord was subbed in the second half, as Kim Little’s efforts meant little. It looked as if Arsenal are on the verge of equalising it again.

However, just when it was all improving, Wolfsburg struck again. Likewise, at the 76th minute, a cut back inside from Sveindis Jonsdottir resulted in a horror show from our keeper.

M. Zinsberger spilled a routine collection which resulted in another cheap goal being handed over. Regardless, this is Arsenal’s second time being knocked out by Wolfsburg in this competition, as they lost a 2013 CL semi final to them as well.

Arsenal women will be going away to Leicester after this setback against Wolfsburg.