WATCH: Odegaard, Saka and Martinelli scored 3 stunning team goals as Arsenal sent a statement against Watford. Read all about the game, reactions, and tweets here! Scroll down below to catch the highlights! 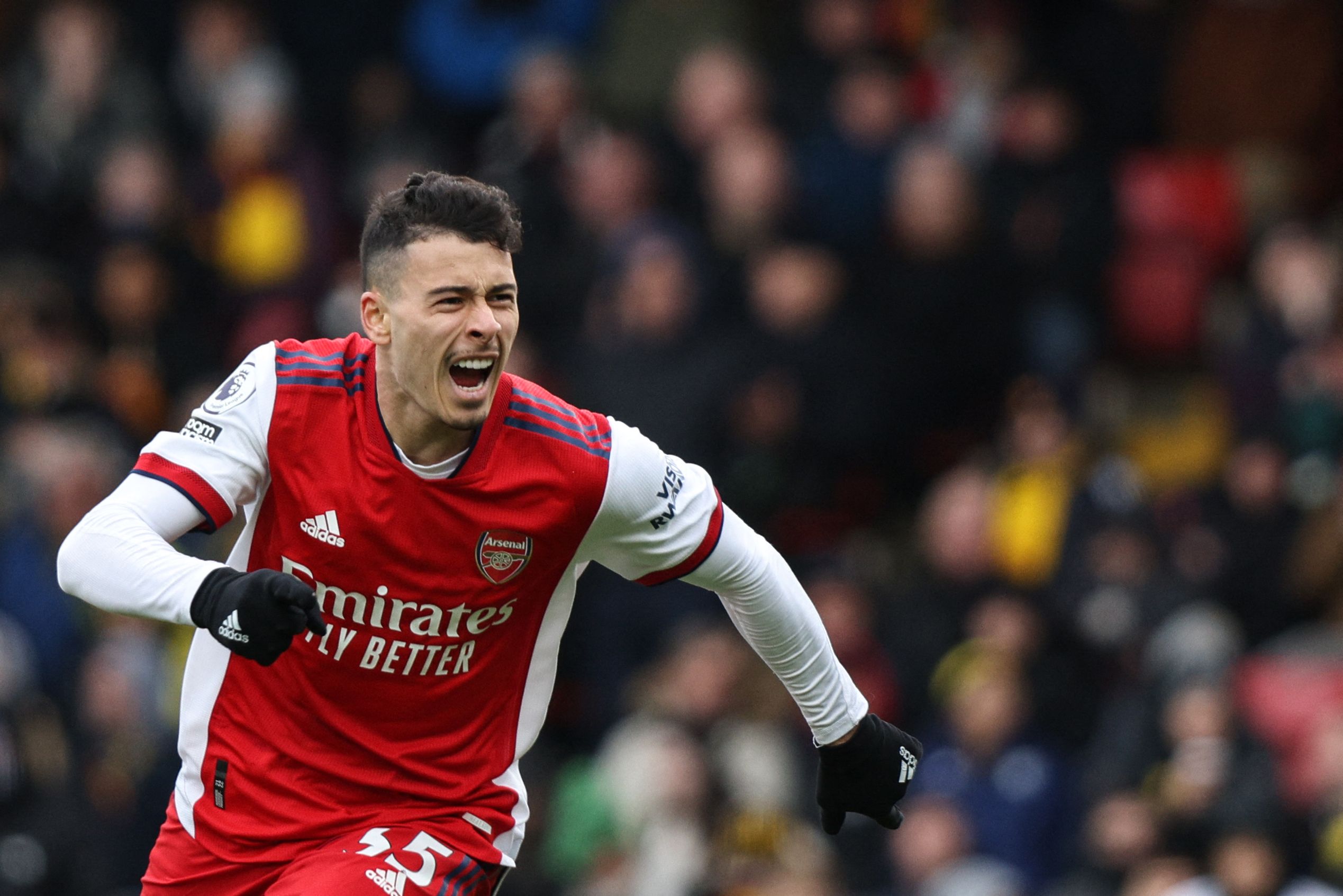 The Arsenal of old against Watford

Right off the bat kick off whistle, it felt like it would Arsenal’s day. And it was. All of Arsenal’s 3 most prized young talents made the score-line as they bagged 3 stunning goals within the first hour of the match.

Inside five minutes after kick off, a thoroughly well-oiled move was started and finished off by Odegaard. Saka passed off the ball to Odegaard, who flicked it through beautifully for Saka as the Norwegian made his run.

Saka cut it back right onto the Norwegian’s left foot who drove shot right in the bottom left corner. However, Arsenal wouldn’t keep this lead for much longer. Just 6 minutes later, Cucho Hernandez would equalize with a bicycle kick.

The Gunners replied back in true Arsenal style. First goal’s supporting cast would now become the main character. Saka stole the ball in front off Watford’s box, played a one two with Lazacette and buried the ball onto the keeper’s right.

The Young stars are the main cast

Saka and Ødegaard are the present and future of Arsenal. Two big, big talents 👏🏻🔥

The beautiful goals galore would continue into the second half with Martinelli scoring. The Brazilian got the ball as Odegaard flicked the ball delicately to Laca, who once again laid it down for a shot.

Martinelli took the shot on his first attempt from just the edge of the box, as he slotted it in the top left corner. Game. Set. Match. Watford struck back with a late Sissoko goal, but Arsenal managed to stay ahead.

😍 The build-up
🚀 The finish
🙌 The celebration

Arsenal’s young talents showed just exactly why it is finally so exciting to be watching this team grow. All of the goals were extremely well-worked, almost as if cogs in a well-drilled machine

The stats show why Arteta is building something special with these young men. It’s exciting to see the team finally play that fast-paced, quick one touch passing game the club’s been always known for.

Bukayo Saka, Emile Smith Rowe and Gabriel Martinelli in the top five U21 players with most combined goals & assists this season. pic.twitter.com/aVAueMcwmj

Lacazette deserves some much needed credit too. The Frenchman provided two exquisite assists for Saka and Martinelli’s goals.

He might be lacking numbers in front of the goal right now, but he’s been a leader top to bottom.

He might not be scoring the goals at the moment, but my word does he still lead by example up top…

Last but not the least, we have to give our plaudits to Mikel Arteta for turning Arsenal into a monster. We’re seeing something special built right in front of our eyes.

On the other hand, looking at some of our rivals sink further and further is not bad.

Credit where it’s due. Mikel Arteta has been top class lately. His philosophy is finally being instilled at the club. pic.twitter.com/Dd1LYX3fz8

Related Topics:Featured
Up Next

Check out all the opinions, reactions as Arsenal comeback late against Wolves

The Reds visited the Emirates and took away all points as Arsenal’s troubles in front of goal cost them. Read all about the game, opinions and tweets here!

Jota and Firmino dealt two blows too heavy for Arsenal

Reds visit to the Emirates against Arsenal: As it happened

Arsenal looked like they might cash in on their dominance for most of the game but it wasn’t to be. A stark reminder for all Gooners that there is still much to be improved upon in the team.

A moment of sheer precision from Liverpool undid all the great work Arsenal had done in the first half. Just a few minutes after the 50th minute mark, a beautifully thread pass by Thiago found it’s way to Jota.

"[The top two] have set other standards again this season." #awlive [bbc]

The Portuguese always loves scoring at Arsenal’s expense and last night was no different. The former Porto man took the ball and ran against the Arsenal backline, and jammed the ball into near post of Ramsdale’s goal.

Just eight minutes later, a failed clearance by Bukayo Saka would cost Arsenal as Robertson stole the ball. The Reds left-back ran with the ball and cut it back for Firmino, who tapped it in with the outside of his boot.

After those two goals, it looked as if Arsenal were done and dusted. Perhaps, a reminder that this is the difference between where Arsenal are and where Arsenal have to get to.

Such a tight game until Jota's opener. Arsenal had a huge chance just before, but Allison denied Odegaard. That was Arsenal's big moment, but they couldn't take it. Liverpool deserving winners in the end. Nine PL wins in a row for them. pic.twitter.com/Atg7iOqJMv

Regardless, Arsenal sit at 4th, one point ahead of United with 2 games in hand. This shouldn’t put Arsenal’s Champions League hopes in danger, however they can’t afford many more slip ups.

Nevertheless, one game doesn’t make or break anything. If anything, this game perfectly showed how Arsenal are transitioning finally and are building a proper squad capable of contending for trophies.

That is all the more evident as Arteta’s Liverpool counterpart Jurgen Klopp only had huge praise for the man.

“He’s 100% a really good coach and you can see it. And he would have been silly, he’s not, if he would have worked with Pep Guardiola and wouldn’t have an eye in on what he’s doing!” #awlive [sky]

This is all we have for Arsenal’s game against the Reds as the visitors took away all points at the Emirates.

Up next for Arteta and his army is the away trip to Villa Park this weekend, going against Liverpool icon Gerrard’s team.

Arsenal struck twice in a dominating win over Leicester City as they cemented their top 4 spot. Catch all the opinions, tweets and everything from the game here! 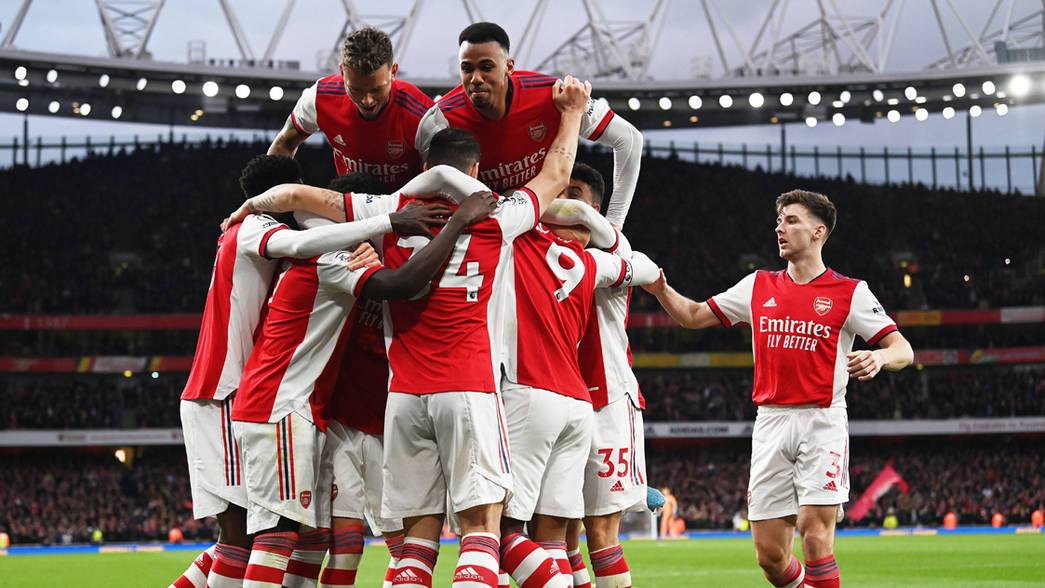 Arsenal sit at fourth with their fifth consecutive league win on form, beating the Foxes. Arteta’s men dominated the proceedings at the Emirates as Leicester struggled to find their footing throughout.

The Gunners started off the game on the front foot with waves of attacks. Finally, in the eleventh minute from kickoff a brilliant corner in from Gabriel Martinelli landed right on Thomas Partey’s head who turned it in efficiently.

Mikel Arteta said Thomas Partey has “come a long way” since he signed for the club after the Ghana international produced a starring performance in Arsenal’s 2-0 win over Leicester 🔴 pic.twitter.com/AxZYqchXka

Soon after, the men in red and white would go on to play around Leicester in typical fashion of late. Brendan Rodger’s team would get a chance in from a cross but A. Ramsdale’s brilliant save in front of goal would keep Arsenal safe.

Second half, was much of the same. Just shy of the hour mark, a frenzy of actions from both sides would result in a handball by a Leicester defender. Partey could’ve headed in another header.

Alexandre Lacazette made no mistake from the spot 🎯

However, penalty it was directed by the referee. Lacazette stepped up and struck it in as calm as the sea on a warm summer day.

Fans and foes alike are finally standing up and taking note of what’s being built here. As always recently, Arsenal looked untouchable and unbeatable.

Arteta after Watford last week: “The key is the capacity to control the game. With a two-goal lead, we have to make 300,000 passes to kill the game”.

The most talked discussed reason for Arsenal’s recent success is their offensive prowess. But, for that to work a team needs a solid foundation. Arteta has finally started to find Partey’s best.

Nevertheless, it is a fact the main reason for Arsenal’s success is the free flowing fluid football they’re playing. Martin Odegaard has truly been the ticking force behind the attack and the coach commends him for it.

Arsenal manager Arteta on Ødegaard: “He was terrific again in every aspect – what he had to do in defending, in build-up phases, the way he understands & manages the game”. 🇳🇴 #AFC

Arsenal are super happy of Martin, signed for less than €40m. No buy back clause for Real Madrid. pic.twitter.com/gA7b31LTDW

That’s all we had for as Arsenal hosted Leicester at the Emirates! Next up Liverpool at home.

Check out all the opinions, reactions as Arsenal comeback late against Wolves

Arsenal came back late in the game to stun Wolves last night. Check out all the reactions, opinions from fans and club alike down below!

Arsenal started off the game on weak footing. A mistake by Gabriel led to Hwang Hee-chan stealing the ball from under A. Ramsdale’s nose.

The Korean international made absolutely no mistake in slotting it home in an empty net. The game continued as a flurry of close chances fell on both sides.

🇨🇮 Nicolas Pépé appreciation tweet. The Ivorian is unstoppable at times, he is able to change the outcome of games single-handedly. Consistency is the key. I would love nothing more than to see him propel to greatness at Arsenal Football Club ⚪️🔴pic.twitter.com/HRhpYZwMg3

However, the moment Arsenal had been looking for came at the 82nd minute. A lovely lob ball in from Martin Odegaard saw Eddie Nketiah receive the ball, who cut it back for Pepe.

A beautiful turn from Pepe who caressed the ball into the back of the net. A chance for Saka went begging soon after.

Martin Ødegaard gets better and better with every game that passes. I’m happy we paid £30mill for him & not £70 odd mill for Maddison. The kid is class

Nevertheless, none of those missed chances would matter in the end. A vintage Arsenal one touch move started off by Odegaard and then Lacazette, who played a one two with Pepe before shooting eventually.

The ball was going wide at first, however a mistake by Wolves keeper Jose Sa whose touch sent the ball inside the net at the 95th minute.

Arsenal now sit at 5th in the table, and with games in hand which could see them enter top four if they keep this momentum up.

What a game with Charlie

ABSOLUTE Scenes!!! This is what it means to be a gooner!!! 🔴 @LacazetteAlex @Arsenal ❤️ #ARSWOL #Arsenal pic.twitter.com/ZuAdbolZaz

The view from the crowd in moments like these really does send goosebumps.

Mikel Arteta had something to say about the French striker who was the reason for so many happy Gunners last night.

Mikel Arteta on Alexandre Lacazette contract: “He behaves like someone who wants to stay with us. We don’t know what’s going to happen at the end of the season”. ⚪️🔴 #AFC

“We don’t have contracts that run for 20 years, it’s our job. I can only praise him and try to help him”. pic.twitter.com/v9gIRTJyM1

Fans are absolutely delighted at the possibility of Arsenal going back to the Champions League. And they are giving one man enormous plaudits.

That man is obviously, the Spanish boss Mikel Arteta. The coach has finally managed to transform a mentally and physically beaten Arsenal squad into a top 4 side.